When will we see Lawson full-time in F1?

Watch Scott Dixon be celebrated for making history at Nashville

Bamber and Lynn second in DPi class at Road America

by Michael Hamilton
in
0 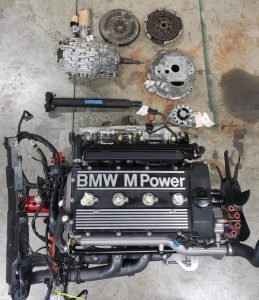 For sale is a complete BMW M3 S14 2.3L engine and getrag 265 five-speed manual transmission pulled from my 1988 BMW M3 that was previously sold few years ago. The S14 powerplant was factory rated at 192 horsepower and 170 lb-ft of torque and consists of a long-block and gearbox assembly with an induction system as well as a header, wiring harness, motor mounts, starter, bell housing, driveshaft, clutch assembly, flywheel, an ignition system, and alternator. Additional parts will be included in this sale.