Marathon for McElrea, podiums for Frazer and Sharp as NZ takes on the world

McLaughlin spins from lead behind safety car, Dixon top ten despite running out of fuel

Keeping up with the Kiwis, your guide to the action: May 13-15

by Glenn Boggs
in
0 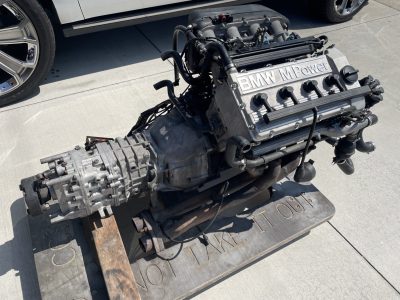 This 2.3-liter S14 inline-four and Getrag 265 five-speed manual gearbox was removed from my 1989 BMW M3 last year before the car was sold. The engine retains a BMW M-branded valve cover, wiring harness, miscellaneous ancillary equipment, and a Bosch Motronic ECU that has been fitted with a Turner Performance chip.

The 2.3-liter BMW S14 inline-four features dual overhead camshafts and two throttle assemblies with two butterfly plates each. Factory-rated output was 192 horsepower and 170 lb-ft of torque. A replacement oil pan and BMW M-branded valve cover with an approximate mileage of 173k miles for the engine and transmission. Compression test results indicate between 220 and 235 across all four cylinders.

The flywheel, clutch, and Getrag 265 five-speed manual transmission remain mounted to the engine.